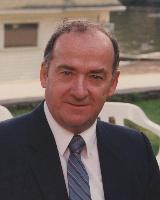 Passed away peacefully on December 3, 2016 at Muskoka Shores Care Community in Gravenhurst, Ontario. Beloved husband to Arlene Jane Millard (nee Caudle, Midland ON) of 55 years. Father and grandfather to Grant and his sons Mason and Clayton. Father to Anne Millard-Ferris and son-in-law Tim Ferris. Brother to Margaret Birch (predeceased) and brother-in-law Ross Birch. Brother to Peter Millard and sister-in-law Gabrielle Jones. Robert was born to Mord and Evelyn Millard, and raised in Coldwater, Ontario. He attended Orillia District C.I. and McMaster University. His love for the motion picture business began at age 15 when he became the projectionist at the family owned Embassy Theatre in Coldwater (later in life he’d work as a relief projectionist throughout GTA in the 80's and 90's). Wearing many hats, he directed, photographed and edited short news reels and promotional films for local businesses. He went on to work at CFOR, Orillia as a studio operator, and maintenance-recording technician. Shortly after marrying and moving to Toronto, Robert began working as a news film editor at the CBC. Later he edited documentaries such as the award winning "Calgary Stampede" and commercials at Chetwynd Films Limited. He struck out on his own in the early 70's starting Millard Film Services, which served clients including Imperial Oil and IBM. At 53 Bob went back to school to nurture a life long interest in electronics earning his Aircraft Maintenance Engineer license at Centennial College. He worked several years as an avionics engineer at Sound Air and Sky Charter. Robert and Arlene returned to their old stomping grounds retiring in Moonstone, then moving to Orillia. Retirement allowed him to spend more time as an active member of the Masonic Lodge, Karnak No. 492 and he was recently awarded his 60 Year Member pin. Robert was also an avid music lover and that was never more apparent than with his collection consisting of over 8,000 Big Band and Jazz records! The family would like to extend a special thank you to all the nurses and PSWs at Muskoka Shores Care Community, Gravenhurst, Bracebridge Hospital and Orillia Soldiers Memorial Hospital for their excellent care. The family will receive relatives and friends at The Masonic Centre, 24 James St. E., Orillia on Saturday December 10th for the Masonic Service which is to be held in the Temple from 1:00 - 1:30pm with a Celebration of Life following in the Masonic Hall until 4:00pm. As an expression of sympathy, donations in memory of Bob may be made to Canadian Cancer Society or the Heart & Stroke Foundation and may be made through the COLDWATER FUNERAL HOME, Coldwater.