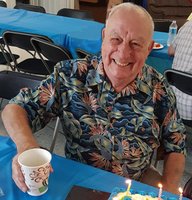 Passed away suddenly at his home on Sunday May 31, 2020 at the age of 91, of the Severn River and formerly of Brampton. Harry was predeceased by his beloved wife Bette in January 2018, after 70 years of marriage. Loved father of Frank Singer (Jane), Joanne Elliott (Paul) and the late Harry Singer Jr. (June 2013). Dear father-in-law of Gail Singer. Loving grandfather of Carl, Kevin, Jodie, Craig, Sarah, Alex, Britney, Tammy, and Christa. Great grandfather of Brent, Stefania, Ryan, Darren, Paige, Jason, Keith, Ava, Grayson, Robert, and Bruce. Brother of Charles and the late John and the late Margaret. Predeceased by his mom Nell Varley. Out of respect for our family and friends, because of the current health situation, cremation has taken place and a celebration of Harry’s life will be held and announced at a later date. As an expression of sympathy, donations in memory of Harry may be made to Orillia Branch of the O.S.P.C.A. and may be made through the Coldwater Funeral Home.