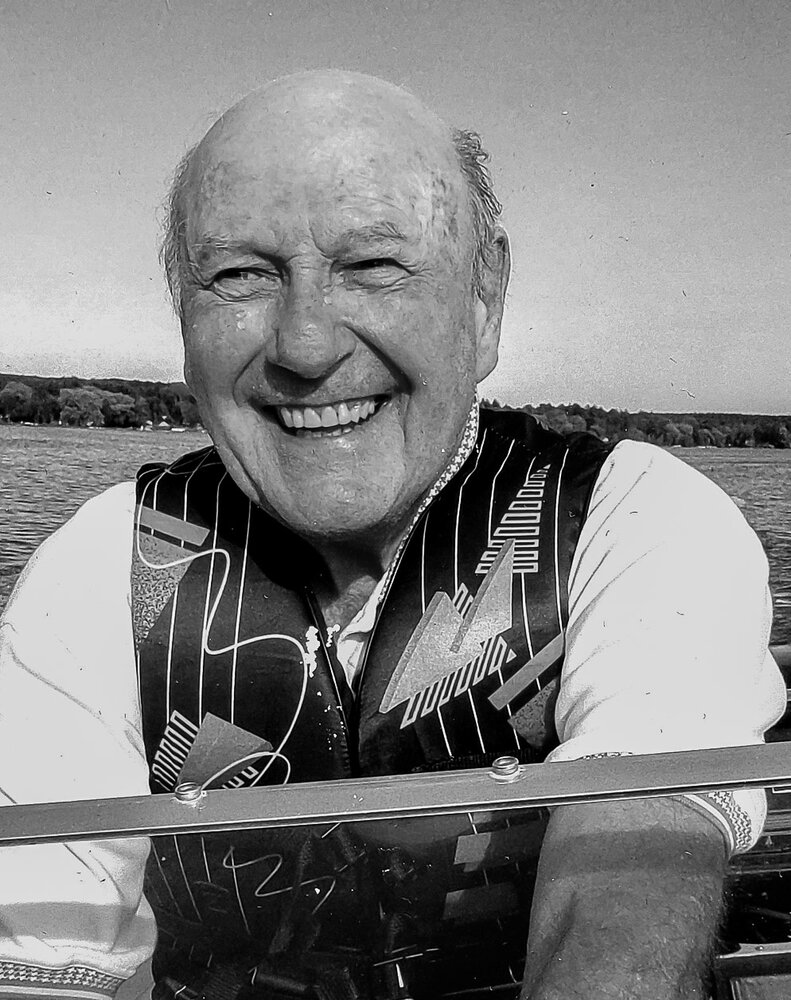 Please share a memory of Douglas to include in a keepsake book for family and friends.
View Tribute Book

Passed away peacefully in his 90th year, surrounded by family, on June 14th 2022 at Hospice Huronia - Tomkins House, Penetanguishene. Doug is survived by his beloved long-term partner Helen, daughter Shelby (Diane), Helens children Jay (Nikki), and Jodie (David), and grandchildren, Sean, Harry and Thomas. Doug was born in Midland, ON in 1933, son of Reginald and Carrie Mulligan.

Doug was a proud alumni of Camp Kitchikewana where he spent his summers from 1942 -1957 as a camper, counsellor, and camp boat supply driver. Kitchi never left Dougs heart and in August 2016, he was thrilled to return to Beausoleil Island for the Kitchi reunion of those who attended camp in the '40's and '50's.

Doug was an Elementary Teacher with the Toronto District School Board for 34 years. He was an avid curler and fitness nut with a focus on running and swimming. When his knees gave out, he walked and always advocated the keep moving approach. Doug taught at many schools in downtown Toronto, notably at Lord Dufferin P.S. where he facilitated many house-league sports teams and ran the summer swim program. Early in his career, Doug always had summer jobs, including returning to Kitchi, working for the Toronto Harbour Police and selling Argos tickets at the C.N.E.  His compassionate iron will helped to put many children on the right path and some returned to tell him so which he greatly appreciated. When he had heart surgery at Sunnybrook Hospital 18 years ago, the cardiologist performing the surgery told him he'd been a student of Dougs, to which Doug replied, "Did I give you good marks?"

He never lost his love for the area and, after retirement, Doug and Helen moved to Orr Lake where they enjoyed over 20 years of  family fun, boating, campfires, Browns corn, and beautiful sunsets.

Doug spent his final days in the supremely kind and excellent care provided by the dedicated staff and volunteers at Hospice Huronia-Tomkins House and by the amazing Dr. Julie Caron.  You all have our heartfelt thanks!   Doug will be forever loved and sadly missed.

As an expression of sympathy donations in memory of Doug may be made to Hospice Huronia – Tomkins House and may be made through the funeral home.

Share Your Memory of
Douglas
Upload Your Memory View All Memories
Be the first to upload a memory!
Share A Memory